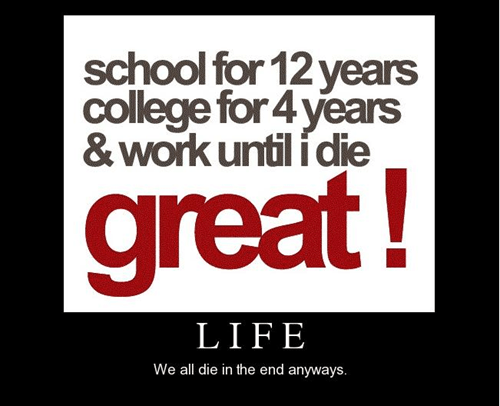 (It’s not really that bad. You just need a few hacks here and there to soften the situation.)

A student showed up in my office a few weeks back with a big smile on her face and the peptic energy that only comes from wanting to tell someone else the best news in the world.

“Dr. Filak! I got a job!” she said, a mix of glee, elation and relief pouring out of her as she explained what she did and how this worked and where she was going to be employed.

I listened and congratulated her multiple times before I asked the inevitable question: “You don’t have to tell me if you don’t want to, but what was the offer?”

She proudly told me how much she was making, which was a decent amount. She wouldn’t have to steal Splenda packets from local diners or live on Ramen for every meal, that’s for sure.

When I asked how the negotiation for that amount went, she said, “Oh. They just gave me the salary they were going to pay me. I asked my parents if that was good money and they said it was, so I took it.”

I then explained the whole process of salary negotiations to her and she realized something nobody at this institution had ever taught her: Salaries ARE negotiable. So are so many other things.

If universities are good at training students to develop skills that will help them get their first career jobs and put them on the path to a fully adult life, they absolutely suck at helping students make the transition from college to that life. I know this from my own experience, as well as that of colleagues and former students, so I thought a good wrap up for the semester would be one final lesson for the group: Life 101.

I asked the hivemind of folks I trust through various social media outlets and connections to tell me one thing they wished they’d known before they left school that they found out the hard way once they got into the “real world.”

Today’s post is the first of two that look at issues beyond graduation, focusing mainly on getting a job and the reality of that first job.

Tomorrow’s post will look at the life issues you face once you get out and become “a grown up” that you probably won’t see coming.

I hope this helps:

There are few things more anxiety-provoking and terrifying than looking for a first career job out of college. You have put in the time and energy to pass the classes. You got the grades they said were going to propel you forward. You got involved in every activity someone said would “look great on a resume” and you worked at student media, internships and part-time gigs to fatten up your experience.

You put yourself out there and… crickets…

As a college student, I feared my parents’ basement. I constantly heard of students who did “all the right things” but ended up living back with their parents in a basement because they couldn’t get a job. I mentioned that to several students and several currently employed former students and the vibe was the same:

“I was scared to death that I’d done all this work and I’d be living back home in the basement. I never had a problem with my family, but I damned sure didn’t want to be back there as ‘that kid.'”

“I knew I could go home. I just didn’t want to. I wanted to be a grownup.”

I have said this before and the people who have experienced it have told me I am dead on with this analogy. Those who haven’t tell me I’m crazy. Then, they experience this and they convert to my way of thinking:

Your first job search is a lot like a bad dating experience: You are ready to go, so you put yourself out there. People are ignoring you and it feels awkward. You don’t know what’s wrong with you, so you get really worried.

Then, someone shows an interest and you have that kind of, “Cool. We should hang out. Let’s exchange info” moment and you get really excited. You start imagining how nice it’ll be and your mind takes you on flights of fancy regarding this relationship.

Then, you don’t hear from them for a while and you start wondering what you did wrong and why they aren’t calling. You start questioning everything you’ve done to this point. You wonder if you should reach out, but you don’t want to look needy.

Eventually, you’ll start to get angry with the, “OK, screw you. I don’t need you thing.” You give up, only to hear from that person shortly after that, with the person giving you a true and great reason why it took so long to reach out and that they really want to see you in a day or two, so let’s set this up…

And then you’re like, “OHMERGERD! I LOVE YOU SO MUCH RIGHT NOW!” but you play it cool and the cycle begins again…

As I’ve told more than a few sobbing students over the years, “It’s not you. You are good. The right people just haven’t figured that out yet. It’ll happen. Trust me.”

(In completing the analogy, that’s what my mother used to try to tell me each time I got dumped in high school… She wasn’t wrong, but the situation still sucked.)

The first career job offer is something most people never forget, and I certainly remember getting my job offer from Mizzou.

Well, I remember most of it.

At one point when I was being offered the job and told about what this involved, I think I passed out on the phone. Blood was pounding in my ears, my chest felt like it was going to explode with joy like a frickin’ Care Bear and I couldn’t believe how lucky I was.

When the first offer came, I took it. No questions asked. I was so happy to be getting that job.

About two years later, my boss called me into his office and told me, “I need to let you know something. I totally screwed you.”

He explained that when he hired me, he gave me the lowest lowball offer he could, figuring I’d negotiate my way up to something more reasonable. When I didn’t, he was over a barrel. He couldn’t just give me more money, but he also knew I didn’t know any better.

(To be fair, he then told me he was getting me connected with the grad program so I could go after a Ph.D. It was a fair trade in the long run.)

He was a good guy and it never occurred to me that he had lowballed me. He then gave me the best advice I share on a regular basis, “Never take the first offer. Always negotiate for your worth.”

Of all the things people mentioned in their responses to me, salary negotiations were the most important:

“Journalism is not a ‘calling.’ It’s a business. Negotiate your pay. Don’t work for less than you’re worth. Think 5-10 years down the road.”

“Don’t count on the editor who hires you to have your economic interests at heart. You should be prepared to negotiate for the pay you need to live, and expect them to expect you to negotiate because it may be a LONG TIME before you have as much leverage to get yourself more money than when you have the initial job offer.”

“Know your worth and don’t settle just to get hired and have a job. A LOT of companies are hiring, so test the waters and see where you feel valued.”

“Agreed with everybody who said negotiate your starting salary. Do some research of similar roles in the area and don’t just take the first offer that comes because you’re scared/excited just to get one, which is what I did.”

In addition to negotiating salaries, people noted that they wished they’d negotiated for extra vacation time, an earlier start for health insurance, improved hours/requirements and other bennies that they thought were just written in stone.

Another person noted this “look forward” in life as crucial:

Take whatever 401k match is offered, even if you can’t contribute anything else right away.

When I went to my college orientation session about 30 years ago, the people there told us that we would likely change jobs about six or seven times in our lifetime. At that point, they meant that we would likely climb the corporate ladder, maybe switching companies within our field, but essentially staying put.

According to recent data, Millennials will change CAREERS almost six times in their lives. People now tend to stay with an employer for an average of three or four years, even with opportunities for advancement. This shifts the entire paradigm of how to look at your first job. Here are some thoughts from the hivemind:

“Paying your dues” is an outdated concept. Don’t let your parents, employers or friends convince you otherwise.

The quality of the job and the people you work with are far more important than the location.

Having a different approach to teaching and research is a GOOD thing!… Students need to know there’s many paths towards your goals in life. Do what works for you.

You don’t have to stay in the first job you get after college forever. It’s okay to change your mind or realize it’s not something you enjoy.

(I wish someone taught me how to deal with) not starting exactly in the position you want and how to be content with the growth process. Your degree does not always land you your dream job immediately.

As much as the dream job might be just a dream, it doesn’t mean suffering and pain should be your daily life at work. Everything from toxic workplace environments and weird bosses to feeling lost and becoming undervalued can make that first job you were so excited about feel like an abusive relationship.

I’ve worked for bosses that I would step in front of a bus for, because they were so helpful, supportive and just entirely amazing. I have also worked for bosses I wouldn’t feel bad about nudging into path of oncoming freeway traffic.

The folks who chimed in on this had similar experiences:

I once told my son that if he ever has a job where the manager/supervisor/head honcho etc, comes over and parks his butt on your desk, smiles and says, “we’re all like family here”…….Leave.

Also that just because things aren’t perfect, it isn’t necessarily your fault:

Your first job isn’t your only job. Sometimes it legitimately sucks and that’s OK. It’s not an indictment on you or your work.

The one caveat I’ll offer here is the one based on my own sense of paranoia: There’s nothing wrong with leaving a job because it’s not what you want or need. That said, have your next move already to go upon your decision to quit.

I equate it to the old “Tarzan” movies when he’s swinging from vine to vine across the jungle. Don’t let go of one vine until you have the other in hand.